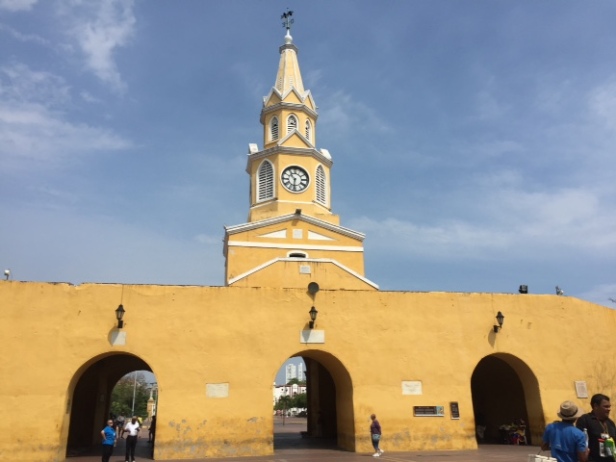 This is the gate slaves from West Africa were forced through on arrival in the port of Cartagena, starting in the 1520s, 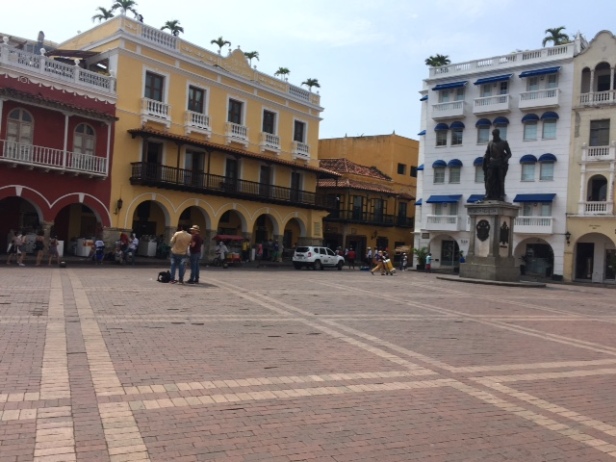 and here is the formerly named Slave Square (now called Carriage Square) where they were sold. These slaves were forced to work up to 17 hours a day, mostly in gold mines, sugar plantations, cattle ranches, cotton fields, and large haciendas. Some slaves successfully escaped and fled to the jungle near Cartagena, where they created the town of Palenque. In 1691, the Spanish government actually issued a royal decree guaranteeing the freedom of the people of this town, and still today the inhabitants of Palenque are all direct descendants of slaves brought over from Africa. Sadly, most slaves were not so lucky, and it wasn’t until the 1840s that slavery was abolished in Columbia.

The building on the left is where San Pedro Claver (1580-1654), a Catalan Jesuit priest lived. He became the patron saint of slaves due to his 40 years of humanitarian work in Columbia. For example, he used interpreters and pictures which he brought to Slave Square to give basic instructions to the newly arrived slaves. He also tended to the sick and travelled from plantation to plantation making sure those he had converted to Christianity were treated humanely (he baptized over 300,000 slaves!). Due to his hard work, the lives of slaves slowly improved.

Here’s a statue of him, 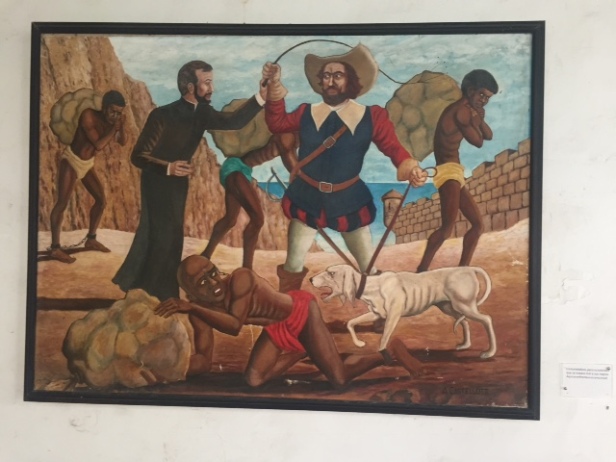 and one of the pictures of him that is displayed in the sanctuary, now a museum.

For the last four years of his life, San Pedro was too ill to leave his bed. Unfortunately, he was not well treated, but upon his death, the city magistrates, who had disliked his persistent advocacy for slaves, gave him a public funeral full of pomp and ceremony. He was canonized in 1888.

Also, in the museum is some African art work (English at the bottom of this photo).

One of my favourite pieces!

Today, Columbia has a diverse population of three main groups- indigenous, Spanish and African. According to our guide book, 50% of the country claims mestizo (mixed indigenous and Spanish) heritage, 20% are white, 14% are mixed black and white, 4% are black, 3% are black and indigenous, and 1% are indigenous. This diversity certainly makes it a fascinating country to visit.